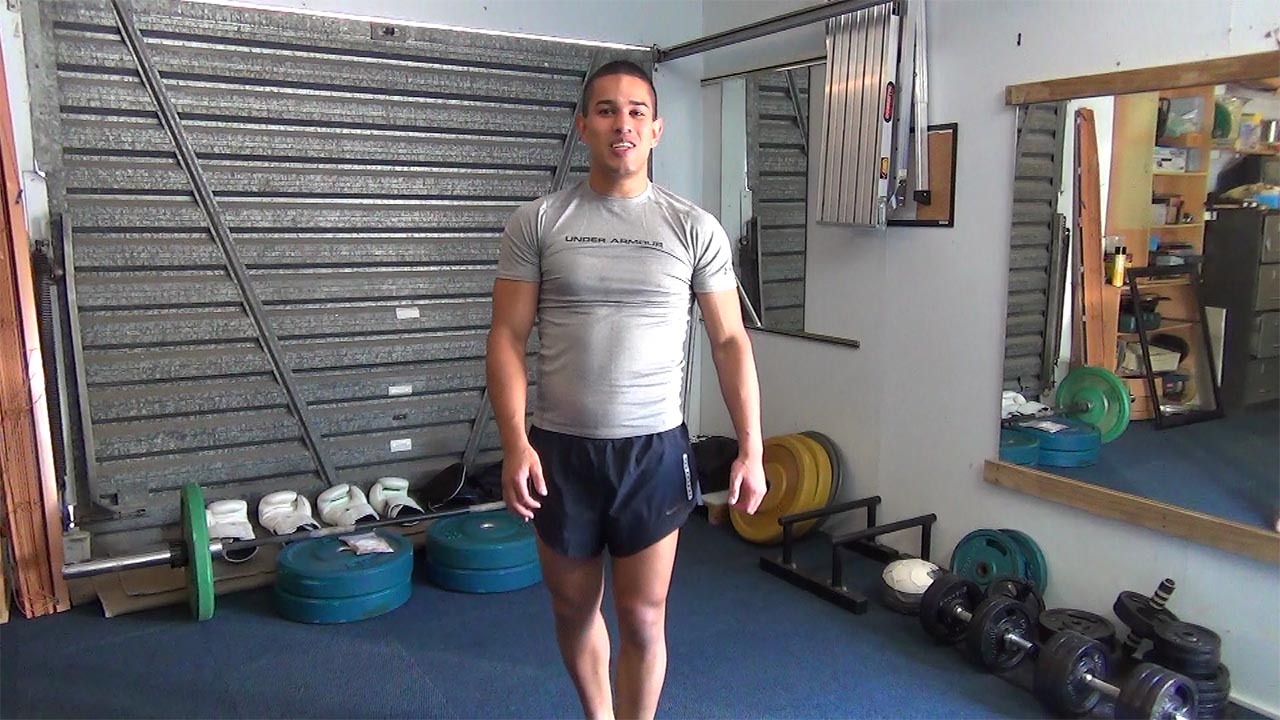 This series teaches you the correct boxing stance, boxing footwork, boxing defense, punch technique and beginner through to advanced boxing punch combinations. By improving your boxing technique you will get better results from your workouts.

Learn boxing technique step by step with no steps skipped.

Study the boxing technique training articles below as each one talks about a different skill or boxing combination. A different punch technique is emphasized with every new boxing combo introduced. Therefore the articles are arranged in a particular order so do not skip any of them – each tutorial introduces a skill that builds into the next.

1. The Best Boxing Stance Explained
This article shares a tutorial video that begins your journey with learning boxing by teaching the correct boxing stance and how to stand correctly for throwing boxing punches and combinations. It is the foundation for all of your boxing combos and strikes.

2. 3 Boxing Footwork Drills to Perfect your Movement
Learn how to correctly step while maintaining your boxing stance with 3 boxing footwork drills that teach you how to move forward, laterally and around. Because if you are unable to keep a boxing stance while moving around the ring then your punches and boxing defense will fail you.

3. The Correct Boxing Punch Technique for Combos
You will learn how the boxing stance allows you to use the foot, knee, hips and shoulders to deliver a forceful boxing punch. You will also learn how to shift your body weight with each punch to form punch combinations.

4. How to Boxing Punch and Engage Opponents to Strike
This is an important skill you will learn in the early stages of boxing – for both punching a boxing bag or an opponent. You will learn to move in with a step to close the distance and get in range to strike.

5. How to Block Boxing Punches – Boxing Defense
Boxing defense is an important skill especially for beginners where they are not yet fast enough to evade and dodge punches therefore blocking skills are important. In this tutorial you will learn how to block punches from various angles including straight shots, hooks, and body shots.

6. The 6 Types of Boxing Punches used for Boxing Combos
In this tutorial I introduce what the 6 main boxing punches are and I give an example of a boxing combination from these punches.

So when I write the combinations in a string of numbers such as 11232 or 1432 for example, then you will understand what punches create the combo and how to do it 🙂

7. Advanced Boxing Footwork Drills – Adding Punch Combos
You now need to learn how to add boxing punches with movement. You are not punching while moving but instead moving then stopping in various positions before then being ready to throw a boxing combination. A boxing bag will swing and move, much like your opponent.

8. How to Wrap your Hands for Boxing and Kick Boxing
This tutorial explains a quick method for wrapping your hands for boxing and kick boxing training. It helps to have a trainer wrap your hands the first couple of times but thereafter you are always expected to do it on your own. Hand wraps protect your wrists and small bones of the hands as well as absorb sweat to protect the gloves.

9. How to Punch a Boxing Bag – #1 Rule
One of the biggest mistakes beginners make is standing too close or too far from the boxing bag when training. If you stand too close your opponent can hit you whereas if you stand too far you will need to take multiple steps before you can strike your opponent. This tutorial will help you find your individual optimal distance to stand from the bag or your opponent and teach you how to maximize your punch range by extending your arms. You will distance yourself from your opponent at a safe range and strike with a moments notice.

10. Boxing Combo for Deadly Left Hooks – 1232
After learning the straight jab and back hand we next learn how to build combinations by adding the left hook. It also teaches you how to transfer your body weight so that you may flow with your punches, linking them together. In this tutorial we use the basic 1232 combo as an introduction.

In the next tutorial we will further our left hook technique with the double hook skill.

11. Boxing Combo for FAST Double Left Hooks – 1233
Combinations tend to flow from one hit into another as your body’s weight shifts. In this case we are not going to throw a hit from the opposing arm following the first left hook. We are instead going to quickly reload the left hook and fire again as if for example the first hook lands and the opportunity is still open for another left hook. This tutorial reviews the technique on how to throw double left hooks.

12. Boxing Combo for Rapid, Powerful Double Jabs – 11232
Jabs help find your range, distract opponents and set up the back hand. A quick, strong jab can tire and dismantle your opponent. Therefore a jab that quickly follows another jab is an important skill in boxing. This tutorial reviews the double jab technique, how it helps set up punches and when to use it.

13. Boxing Combo for Ruthless Right Hooks – 1432
The right hook is an underrated boxing punch that has a lot of potential and power but it is quite difficult to execute. Therefore it is a punch that should not be excluded from your training – it may not work for some people as everyone has their signature punches but I still encourage drilling and practicing it.

14. Simple but Devastating Boxing Combination – 23, 23, 23
This combo drills in the straight right and left hook. It is a boxing combination that helps beginners practice how to shift their body weight to set up the lead hook and shift the weight back again so it may be continually repeated. A strong stable stance is required for this combo.

15. Boxing Combo for Heavy Hooks – 1234, 34
When you have injured your opponent with a hard jab or back hand punch then it is time to close the distance and take the opportunity to hit hard to finish the fight. This boxing combination teaches you how to adjust your stance for throwing heavy hooks multiple times.

16. Boxing Combo for Brutal Uppercuts – 1252
People are always leaving gaps open in their guard presenting opportunities where they can be hit. Uppercuts strike underneath the jaw, an area that is often open but quite difficult to hit as it requires you to get in close. This tutorial explains the technique behind the uppercut as it is a punch that is often performed incorrectly and when performed incorrectly will open you to being hit by removing your defense.

17. Boxing Combo for Beheading Right Uppercuts – 12362
In this tutorial I present a boxing combination that uses the backhand / right uppercut where – this time we are doubling up on the back hand much like how we threw the left hand twice with the double left hook.

18. Hardcore Boxing Combination – 1123632
This hardcore boxing combination combines many of the punches we have learnt so far in the technique tutorial series. Use the combo to assess and polish your competency in the punch techniques as well as your ability to shift your body weight repeatedly. It is a great combination to use for a fitness workout too!

19. Boxing Combo for Long Lethal Uppercuts and Hooks – 1 Long 6 32
The long hook and the long uppercut have some technique variations when comparing them to their conventional versions. In this tutorial we will learn how to throw the uppercut and the hook to maximize both range and speed.

20. Boxing Combo for Overhand Punches – OH 2 5432
The overhand is what the name implies – it is a punch you throw over the hands of your opponent to hit them in the head. Sometimes pulling or pushing your opponents hands down on the strike. The rest of the punches flow and follow on from the overhand right to turn it into a little combination for you to practice.

21. Boxing Combo for Heart Stopping Body Shots – 12 Rips 32
We will use the jab and straight right punches to close the distance and setup our body shots which come in at 45 degree angles smashing into our opponents floating ribs. A good body shot can stun your opponent especially when they are already tired. Once we learn the body shots we can add on a left hook and straight right to keep the combination flowing.

22. Boxing Combo for Dodging Punches – 12 Back 232
After throwing the jab and straight right punch your opponent may try and counter punch you. In this situation we are not blocking the punch nor slipping it – we are quickly stepping back out of the way to dodge their counter punch and using the momentum to retaliate. View the boxing tutorial to learn more.

23. Boxing Combo for Agile Angled Strikes – 12 Angle 232 Phase 12
A versatile combo that changes the attackers angle with agile footwork to strike an opponent from a different angle after the initial strike. The attacker next moves out of range before re-engaging for a final strike. In this tutorial you will learn how to pivot to quickly change angle when in firing range.

24. Boxing Combos for Evading Punches with Slips – 1 Slip 23
Slipping is a boxing defense technique use to evade straight punches like the jab. When you are in striking range of your opponent its best to use evasion techniques to avoid any impact by either moving out of range, weaving or as this tutorial teaches – slipping. You will learn how to slip the left and right straight punches and how to follow on with strikes after slipping a punch. With these techniques you do not need to withdraw yourself from the fight – you stay in there, evade incoming strikes and retaliate with your own.

25. 4 Boxing Combos for Weaving Punches – Evasion Techniques
In the previous tutorial you learnt how to evade a straight punch by slipping, now you will learn how to evade hooks by weaving aka rolling. As with slips you will also learn with weaves to evade to the left and the right followed with a retaliation. Because as you evade your body is positioned for certain strikes and new opportunities will present themselves.

You will then ‘pull out’ those boxing techniques when you are on a boxing bag or fighting an opponent in the boxing ring. Depending on the opportunity that presents itself.

Extra tutorials elaborating on many of the skills introduced in the series above. Except now you  can see me teach the techniques in a class – to beginners in my ’16 Week Beginners Boxing Training Program’.

Intermediate Skills
– How to Change Angles in Boxing

Watching video tutorials helps you learn boxing faster by teaching it to you from a different perspective than how you would learn in person. Taking the time to sit and understand each skill and drill will enhance your learning.

If you have found the content helpful please write a review on Facebook.com/Boxing101NZ

It would be very much appreciated.